Growing up in a small rural farming community nurtured and developed my love for fitness, the outdoors, nature, high standards and family values. I experienced the value of hard work and faith when we would plant seeds with the faith that with care and nurturing they would turn into profitable crops.

I attended college in preparation to be a teacher. Early into my education, I determined that I would be a disrupter, a different kind of teacher. I would gain experience in the real world and use that platform to be a teacher who really knew what they were teaching based on experiences.

In my quest for experience, I embarked on a series of jobs. I worked full time in a YMCA (non-profit) while attending college full time. Naturally, my first job out of college was with the YMCA. In a short time, I was responsible for turning around three different YMCAs and became recognized for my marketing and management skills. The hard work and experience paid off as I became one of the youngest and highest paid YMCA Executive Directors in the country. But I was hungry for more and could not see myself in that role for the rest of my life. I had learned what I needed to learn, including being involved in a campaign to raise over $10 million.

Then came a big decision. Would I leave the security of a job in order to follow my passion? It didn’t take much self-analysis and I was off to my next adventure. By now, as one of the early pioneers of the sport, I had competed in The Ironman World Triathlon Championships three times and I was recruited to be a test rider for a start-up funded with $2.4 million of venture capital. To take this kind of step backwards seemed a bit strange at the time, but I wanted the experience of a start-up with a proprietary product. And this was my first venture into the profit world.

In a short time, I had been promoted to Marketing Manager and a whole new world opened to me. I was literally traveling the world promoting the bike, attending trade shows, managing focus groups and developing marketing materials. I was an integral part of the team to develop the product, but again it was hollow. I was not in control of my future. But now I had a different kind of confidence.

A friend invited me to join his M&A (Mergers & Acquisitions) group. Now I was clearly out of my comfort zone but decided this would be a good experience, too, and I joined his team. I started producing much needed marketing materials and soon I had earned my way into helping structure some of the deals. The learning curve was straight up. After helping structure over $1 million in sales, I was offered the lead role with a big health club project.

It took about six months to structure the right deal, including financing, and I ended up with a role and equity in the new business. We immediately went to work to take over a failing operation. The only downside was that we grew so fast that we nearly went out of business because of the growth.  For me, this was not fun anymore. I needed something new and challenging.

Something about the Amway business caught my attention and I decided to give it a shot. Again, I knew very little about this kind of business, but it was one more experience on my path. It didn’t take too long to qualify for the much-advertised free trips to Hawaii and Disney World. But I needed more and missed fitness.

My daughter’s Montessori school needed a PE teacher and I said yes to the next opportunity. Teaching a multi-age group was challenging, and I especially liked the freedom a private school afforded their teachers. Building an igloo with the students was not only fun, it was encouraged by the school administration. We received national recognition for our creative use of upstate New York’s infamous snow.

The Montessori school board knew of my business reputation and approached me on becoming the CEO/Principal of the school. Again, I knew very little about running a non-profit school, but I wanted the experience. What an experience it was. The school was out of money and being evicted from their leased space. It was a lot of hard work and stress managing all the spinning plates, but we went to work, tightened up the organization, cleaned up the loose ends, raised capital, and purchased a building. Then we raised more capital for renovations and three years and one day later we moved into our own building. It was time for me to move on.

I loved, and missed, the fitness world. I was good at it. I decided it was time to start my own fitness business from the ground up. I was tired of working for other people and organizations. I decided that I was unemployable.

Now what to do. I decided that I wanted to provide the most respected fitness business in my market for people who could afford my services, twice what other trainers were charging.  Doing my own thing was not easy. I had lots of fear, surprising since I had so many pervious successes but doing my own thing was very different. I took the plunge and purchased a list of CEOs and committed to my mastermind group that I would make 1200 cold calls to launch my business. This was not easy, but I was determined.

Eighteen months later I had a successful business that earned me just shy of $100,000 a year working 30 hours. I had now added the entrepreneurial skill set to my life experiences. So I added a group fitness program, a cycling business and a coaching business. I totally bootstrapped everything, again adding to my base of experiences. Always still profitable, I quickly learned that more is not necessarily better

I have always trained hard and smart. In 2013, I was in the middle of a 2-hour trainer ride. I did not feel well but decided to finish the ride anyway. I had felt worse in some triathlons. My significant other, Kim, was concerned. I finished the ride on the second floor of the training center. I had a 12-year Labrador Retriever, Grizz, who was downstairs, his days of climbing stairs behind him. He was unusually upset and pacing the floor. Kim said she thought he was looking for me.

I leaned over the railing and called out his name. He turned, looked at me and gave ‘that look.’ Then he went and laid back down. I had never seen anything like it. Neither had Kim. Now I was ready to go to the ER to see what was going on. There are a lot of amusing details, but the essence is that I will never forget the doctor telling me I had had a heart attack.

What went through my mind was crazy. Not only did I suddenly have a health concern, but what about my business? I had taught 96% of all the classes that month. I had also been intentionally developing my staff team in a very deliberate way. They made my day when they came to the hospital and informed me that arrangements had been made to cover all the sessions and I had two months off. The sense of relief was incredible, not only were my members being taken care of, I could take time to recover without my income going down.

Given my lifestyle, how could this be? Fortunately, we had arrived at the hospital early enough to prevent any damage to the heart muscle. 🙂 Fortunately, nine months and one day later I was competing in the Ironman Triathlon in Lake Placid, with my cardiologist’s blessing.

I remember talking to a friend in college that I really wanted to teach college after I got some experiences in the real world. (We were both frustrated with the lack of real-world experience most of our college professors demonstrated.)

From a young age, I wanted experiences to make me a better teacher. But with all of these experiences, and a new understanding of what teaching college is really like, how could I go back to teaching in an academic environment?

That is where the 6-Figure Trainers Program came from. Through teaching and mentoring, my team and I can reach more people than I can teaching college. The program can and does change people’s lives and businesses for the better, permanently.  The business owner has very different needs and commitments than the college student – vastly different.

We bring theory to the learning experience, of course. We know best practices, we teach best practices. We live best practices. We also know the real world, which can sometimes go sideways. We have lived in a sometimes sideways real world of every emotion imaginable. We have figured out how to right the world for the long term. We can help you fight your way out of almost anything. It is our mission to help you, provided you allow us to.

PS. Before graduating from college I had secured a full time YMCA job in a distant city. I was working part time at the YMCA next to the college. The Board president wanted to see me as soon as he heard I had a career in front of me in the YMCA. He wanted to know if I wanted some advice and I told him yes because he was a very respected businessman and I respected him, too. He told me how frustrated he gets trying to get things done in the YMCA organization He went on to say that in his business he had learned if something needed to be done, there was no need to wait weeks or months – put it in place Monday morning. I have never forgotten that advice.

My advice to you is the same. Take action today. It saddens me that on more than one occasion people have told me that they wished they started working with 6-Figure Trainers as soon as they learned about our services. In almost all the cases, it would have radically changed their businesses and their lives. That is our mission.

PPS. Always an adventurer, Ron’s ideal day and life-plan is very mobile. He can be spotted anywhere in the country on his beloved BMW touring bike. 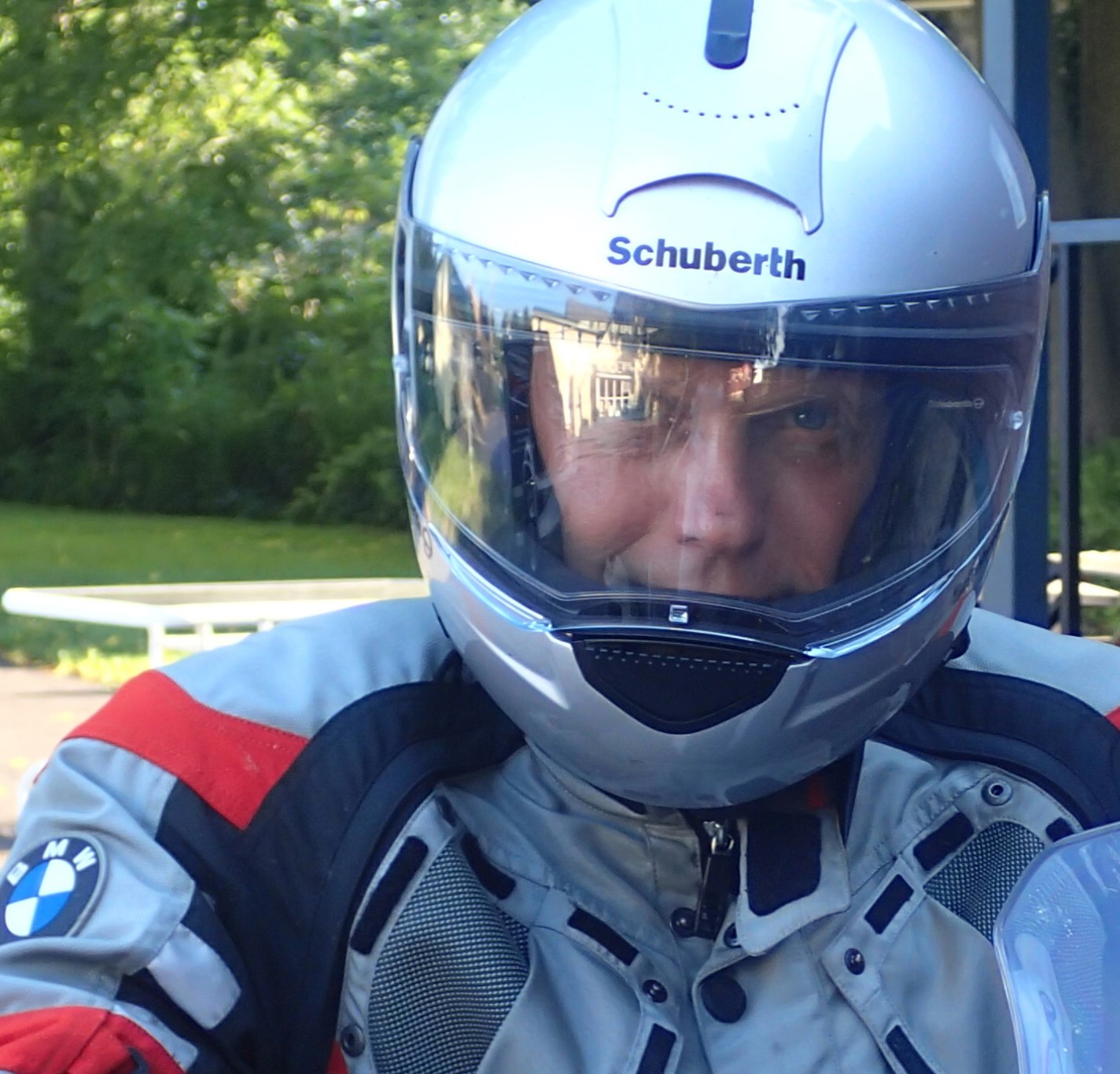